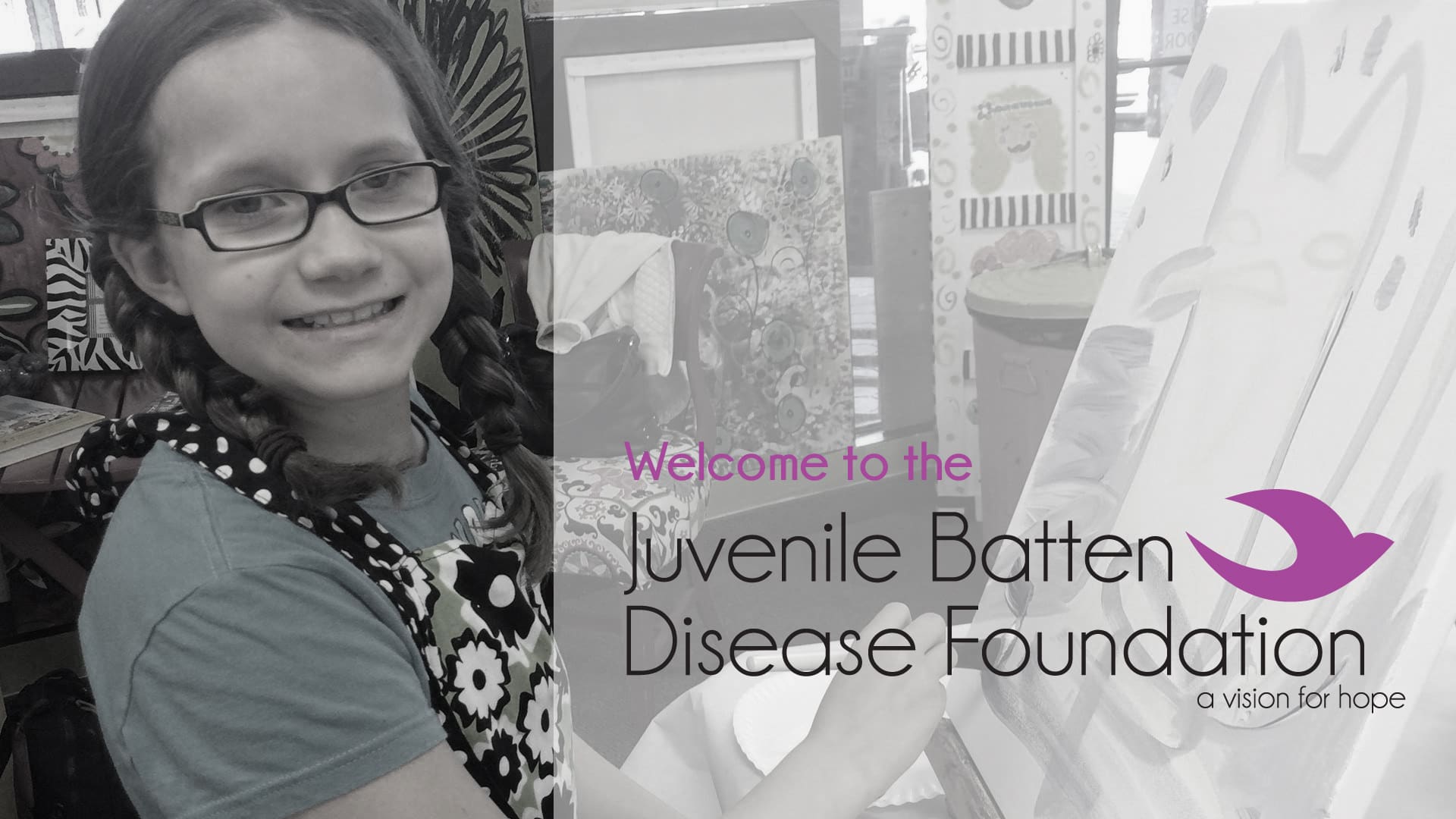 Juvenile Batten Disease is an inherited disorder that primarily affects the nervous system. After a few years of normal development, children with this condition develop progressive vision loss, intellectual and motor disability, speech difficulties, and multiple types of seizures which are often very difficult to control. Juvenile Batten Disease is the most common type of neuronal ceroid lipofuscinoses (NCL), a group of neurodegenerative disorders, but its exact prevalence is unknown. Currently, there are no specific treatments available to cure or slow the progression of the disease, only medications to try to address symptoms such as seizures, behavioral challenges, sleeping disorders, and other significant medical issues. Eventually, children with Batten disease become blind and bedridden, and lose their ability to communicate. Batten disease is always fatal, with death usually in the late teens or early 20s.

This foundation was started by Julia & Brad Burtwistle, whose 12 year old daughter Olivia was diagnosed with this devastating disorder at the age of 7 and has been fighting Juvenile Batten Disease for nearly 5 years.

They believe, through the support of the public, they will be able to find a therapeutic approach to stop this devastating disease.

Our daughter, Olivia Claire Burtwistle was born on August 31, 2003. From the beginning, she was perfect. She met her milestones early and was an amazing little girl always asking questions with a vivacious appetite to learn. When she entered pre-school, we noticed she was having problems learning the sounds of the alphabet consistently and things she had already learned would escape her memory. We didn’t think too much of it because we knew children all develop at their own pace and were re-assured she just needed some repetition. She was still a hoot and loving life! When she entered kindergarten, the teacher suggested she repeat the grade just to make sure she was ready for first grade. Again, she was incredibly bright, but was having problems connecting her learning. By the 2nd go around for kindergarten, she was having increased behavioral issues and when she was getting consistent sad faces (6 weeks continuously), we moved teachers. In the first grade, we had a fantastic teacher, but she was really concerned she wasn’t seeing the board even though she was in the front of the room and had been prescribed glasses. We stumbled through that year and received a diagnosis of “bulls eye macular degeneration.” I remember thinking how devastating that was and that she might not get that sight back, but I had no idea THAT WAS JUST THE BEGINNING!

We took her to a Pediatric Ophthalmologist specializing in rare eye diseases and received our first incorrect diagnosis of Cone Rod Dystrophy. This just didn’t make sense, since our little girl was just 7 years old and this disorder usually presents in the late teens. We were referred to another expert and were just hoping the diagnosis we received the 2nd time of Leber’s Congenital Amaurosis (LCA), an inherited retinal degenerative disease, was correct because that was primarily an eye disease and there were clinical trials already in progress. At that time, Olivia wasn’t showing any significant signs of neurological impairment, but when we returned home (after traveling across several states), we received a call that they wanted us to do some more genetic testing for something involving the brain as well as eyes. Her doctor wouldn’t tell us exactly what she was thinking, but I can tell you we received this call on a Friday and it didn’t take us long to research and discover the terrifying realm of what could be wrong with our little girl. I remember my husband finding Juvenile Batten Disease and saying….”ooh, we don’t want it to be this one.” Sadly our worst fears became a reality as first the skin biopsy and then genetic testing confirmed the grim diagnosis. NO treatment, NO cure. Just a painful, continuous loss of function until she would no longer be with us. WE WERE DEVISTATED!

The geneticist told us there was limited data out there but that this was a neurodegenerative brain disease that would leave our daughter blind, immobile, cognitively impaired and eventually dead between in her teens or 20’s with much of those last few years in trapped in a body that would not allow our daughter to communicate. This disease is rare and most specialists know very little about this disorder.

My first call was to my sister, Dr. Tammy Kielian, who happened to be a neuroimmunologist with her research lab at the University of Nebraska Medical Center in Omaha. After learning about Olivia’s diagnosis, she decided to shift the focus of her research and “get in” to help cure Juvenile Batten Disease, the disease that had just taken over our lives and that her previously happy, healthy and full of life 7 year old niece was now going to have to tackle.

Looking back, we can see there was a change in her personality that was evident when she was about 3-4 years old. She would suddenly start to have the type of fits you would expect from a 2 year old, but she had never had them at that age. These constant fits really put a strain on her relationship with her older sister Sydney, who was 7-8 at the time. Thankfully, Sydney does not have the disease, but of course like all of us, is still affected.

Olivia suffered her first grand mal seizure on Christmas day, 2013 at the age of 10. I remember feeling so fortunate that I happened to be at the bottom of the stairs where she went into the seizure about half way down so I could catch her. I yelled for my husband and all we could do was cry. We both knew this was a progression of the disease and that was terrifying and left us speechless trying to figure out how we would continue to live with this harsh new reality.

There is nothing more devastating than watching your child suffer. We used to think we had challenges, but when faced with this, we desperately wanted our “old” lives back. Olivia is now 12, completely blind, has seizures and suffers bouts with dementia. HOWEVER, she is still with us, is funny and likes to play jokes and loves her older sister and 2 dogs Lucy and Stanley. She also wakes up every day talking about her dogs in heaven…I mean EVERY SINGLE DAY, making me wonder what her mind is going through. Her older sister Sydney struggles with the challenges of being a 16 year old girl, watching her sister lose abilities she once had, feeling the guilt of avoiding being with Olivia because it is simply too stressful dealing with the screaming fits her sister now has…, but she loves her sister and always does her best to be everything she can be for her…we are very grateful for what we have as a family and the generous support of those around us.

Thank you for joining us down this difficult road to fund a cure for Juvenile Batten Disease.
-Julia Burtwistle 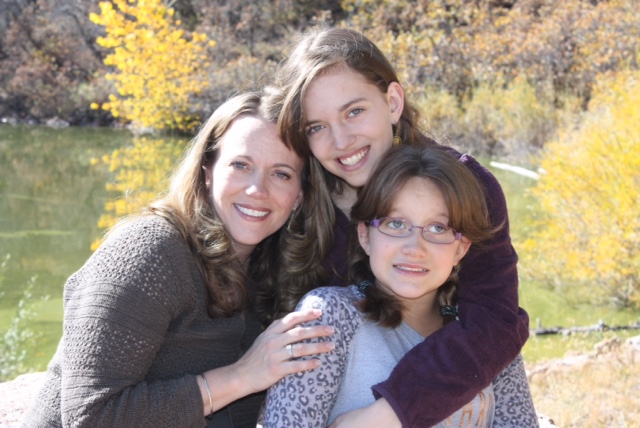 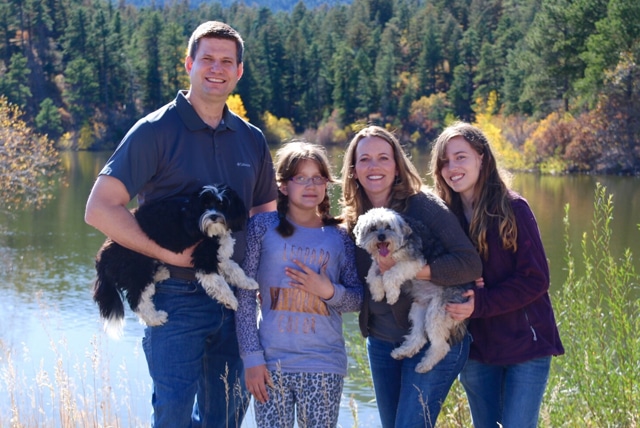 We are very thankful!

We are working hard to set up fundraisers to further the medical research and public awareness of this devastating disease. If you would like to support an event, please reach out to me…I would love to work with you.

As part of a school project, two of Sydney’s dear friends, Sydney Neher and Ciara Abeyta, set up a booth at local youth sporting events to help bring awareness and funding for Olivia and her disease. Sydney Neher is also selling camera strap neck scarves and other items hand made by her mother at school and on etsy.com 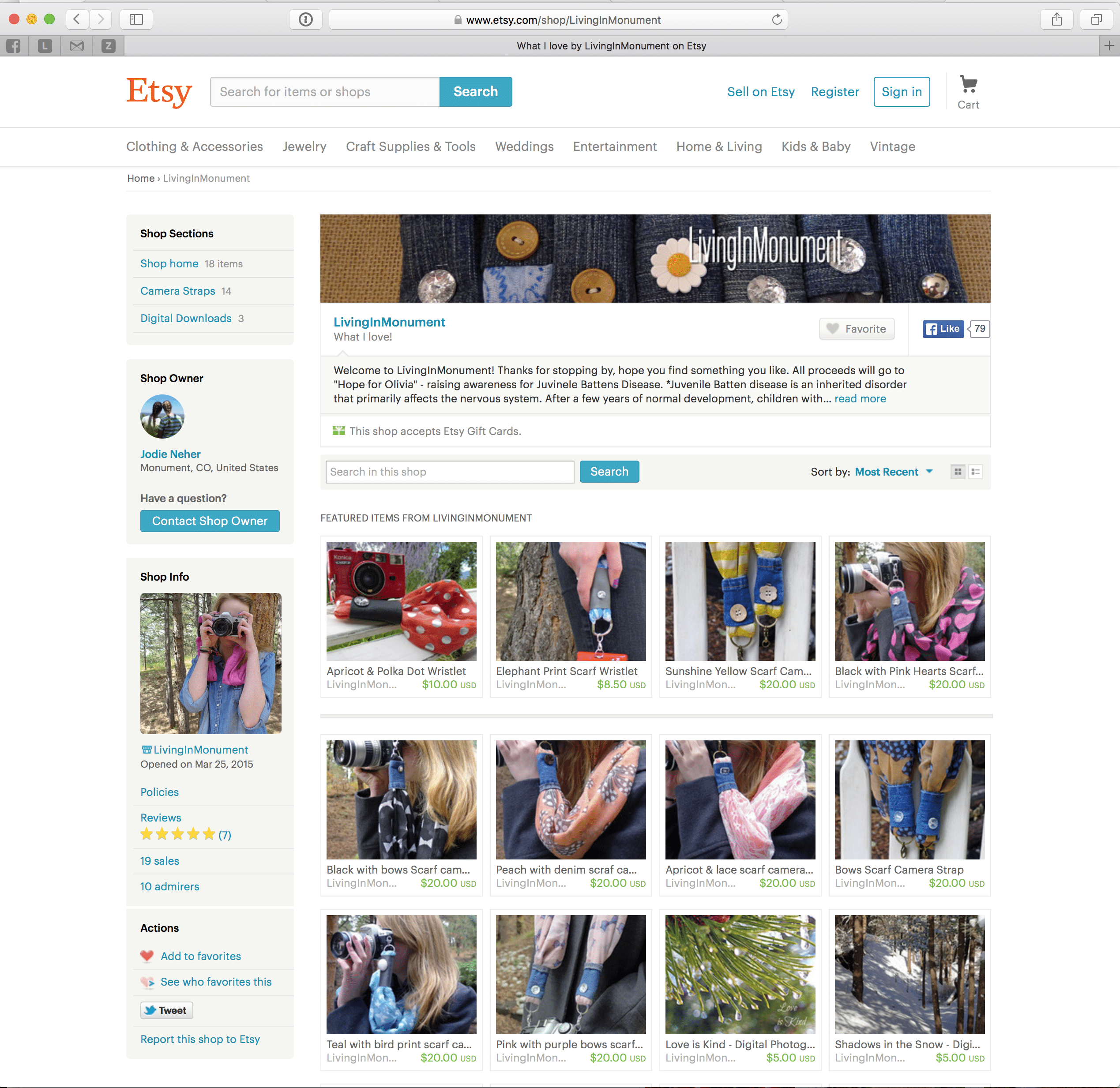 Make checks payable to: “The Juvenile Batten Disease Foundation – A Vision For Hope”

THE JUVENILE BATTEN DISEASE FOUNDATION – A VISION FOR HOPE (FEDERAL TAX ID 46-5123730) IS A COLORADO NONPROFIT CORPORATION WITH FEDERAL TAX EXEMPT STATUS AS A PUBLIC CHARITY UNDER SECTION 501(C)(3).

Thank You for Your Support!